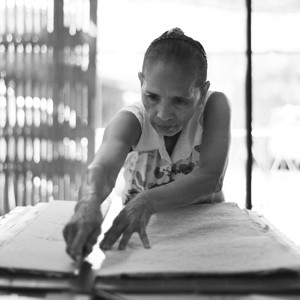 What do you do if you live in a slum, have small children, and your husband leaves you? He doesn’t give any financial support, and you can’t get a job because you never finished grade 7. Even if you could get a job, who would look after your children? If you send them upcountry to the grandparents, it means you will only see them maybe once or twice a year. You certainly can’t afford a babysitter.

In 2014, Hope Cards 8 ladies made over 13,000 cards sold both in Thailand and overseas, and the market is growing because each card is a work of art. But the best part is that the ladies can make the cards in their homes, enabling them to care for their children. Families stay together. That’s what L.I.F.E. is about.

Stingy. That was the word La used to describe her husband when she first applied to make cards at Hope Cards. Others would have called him much worse.

Though La was heavily pregnant with her second child when she began at Hope Cards, her husband would hardly give anything to support his family. He worked as a bartender in Bangkok’s infamous red-light district so his wage was good. Yet it was La would had to pay for almost everything. For 4 years, La has worked at Hope Cards, a steady, smiling lady who obviously dotes on her two children. This year, her already precarious family situation got worse. Her husband left her, heading north to buy a guesthouse. Once there, he discovered he didn’t have enough money. So he came back to visit La and his children, but not to care for them. Instead, he stole La’s meager savings and headed back north. When she called him asking for the money back, he told her ‘what was hers, was his’, and demanding she give him more money (inferring she should become a bargirl/prostitute to do so). Could the situation get worse? Yep. La’s daughter broke her arm at school. Desperate, she called her husband, begging for his help. He came, but was it to help? When he visited his daughter in the hospital, he brought no gift, even a small one. Instead, he took the gifts others had given her. He did say he would stay for awhile, but is that good news or bad news for La?

The one bright and shining light for La is her ‘family’ at Hope Cards. They are there with her and FOR her no matter what. They’ve cried with her, prayed with her, helped her and they will continue to be there for her in the months to come. She is not alone. She has Hope. That’s La. That’s what L.I.F.E. is all about.

Love In a Family Environment